The rest of our trip in Canada canceled due to Covid-19. Like many travelers, all of our plans were messed up. Like many people, our lives have been impacted by this pandemic.

The project before Covid-19

We are talking about the “rest” of the trip, because the Yukon was one of our goals in Canada. Unfortunately, we were not able to go in 2019 during our road trip with the RV.

For summer 2020, we were going to go on a second road trip of about 4 months to visit the Yukon. And finally finish this trip across Canada.

The plan was to leave our home in Banff on May 1st to head up to Alaska. On the way, we wanted to take our time to explore northern British Columbia.

Then, in the Yukon, we would have visited the Carcross Desert (where Pierre-Adrien initially wanted to propose). Then Whitehorse and the surrounding area before going to Alaska. We thought we’d be in Alaska around the 4th of July for Independence Day.

We were going to be so close that it was impossible not to take the opportunity to travel in Alaska. I had found many hikes to do, on fjords, glaciers or around lakes. Then, we wanted to visit Denali National Park.

If you haven’t heard of Christopher McCandless’s story yet, I invite you to watch the movie Into the Wild.

The US authorities had the bus extracted by helicopter on June 18, 2020. Reaching the bus became a risky but popular adventure for fans of the story. (This hike was not on our minds!) 😉

Continuing in Alaska, we had planned to take a trip to Fairbanks and the North Pole before taking the Top of the World Highway that leads to Dawson City, Yukon. 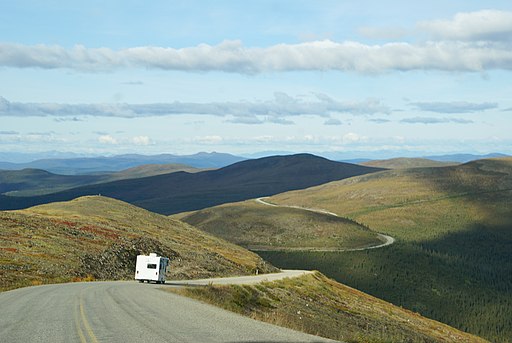 Dawson City would be our resupply and departure point for a two-week adventure on the Dempster Highway, a round trip to the ocean.

One of our goals on the first road trip was to reach the polar circle. We were not going to go any farther. With the RV, we were already quite afraid to burst a tire on the highway. So the Dempster Highway was a bit too much for us with this vehicle. However, we were going to travel in 2020 with a lighter vehicle, so we thought we would go as far as the Arctic Ocean to swim. (A new goal to add to the Bucket List, before 30 may not be, but we’ll write a new one for before 40 years old.) 😉

We would then have gone down to Vancouver in British Columbia. With a little detour to Prince Rupert and Squamish (for a hike we couldn’t do in 2019).

From North Vancouver, we wanted to take the ferries to Powell River and then Vancouver Island via the Sunshine Coast. We then wanted to go back to Tofino and Victoria, this time going through Port Renfrew.

Back on mainland, we thought we’d go back to the mountains through Revelstoke and Glacier National Park that we missed in 2019.

From Alberta to Quebec

The final destination of these more than 15,000 kilometres of road trip was supposed to be Montreal. We wanted to see some friends before we left. We also wanted to stop by Waterton Lakes and the Prairies, two National Parks which we didn’t take time to see in 2019.

From Montreal, we would have taken a flight back to France after selling our pickup, Jimmy.

Ready to go despite Covid-19

When Covid-19 started at the beginning of the year, we first had the closure of the ski resorts. Then PA got laid-off from the restaurant in which he worked as a dishwasher. All the restaurants closed at the same time, except the ones that could deliver or offer takeaway. PA continued to deliver pizzas for Domino’s. PA’s parents were supposed to spend 10 days with us in Banff, they had to cancel because of the borders closing. In April, we should also have seen our friends Jim and Laurie whom we met last summer.

The U.S. border was also closing. We were going to do the road trip without Alaska. But then, the borders of the Northwest Territories closed because of the lack of medical infrastructure. Yukon quickly followed. This is where we really began to understand that our trip was in jeopardy! No Yukon, no road trip…

In the meantime, the Government of Canada had closed everything: national parks, campsites, even highway rest areas to prevent Canadians from camping and spread Covid-19! Mid-April, when the situation began to calm down in Canada, we took the decision to let May pass. We could camp where it was possible, to see if the borders would reopen.

We were ready, on April 29 we sold our campervan. The next day, we left our house-share in Banff, with our suitcases, our mattress (from the RV) and camping equipment.

Like Loading...
Related Articles
Jimmy, our converted pickup truck
Living in Banff, Alberta, Canada
After the road trip in Canada